The project is a partnership between SFU Library, the Multicultural History Society of Ontario, University of Calgary, University of Victoria, the Vancouver Public Library, and the University of Toronto, which besides contributing material on the Doukhobors from the John Mavor Papers has also digitized selected books from the John Luczkiw Collection of Ukrainian Canadiana.

The Luczkiw Collection contains material on Ukrainians and published in Canada from 1900 to 1950.  Most of the material pertains to the first wave of Ukrainian immigration to Canada, from 1891 to 1914, and the second wave, which arrived in Canada during the interwar years, from about 1922 to 1939. The Ukrainians who entered Canada during these two periods were primarily peasants from western Ukrainian territories: Galicia and Bukovina in the Austro-Hungarian Empire, and after World War I part of Poland and Romania.

The immigrants settled on western homesteads and lived predominately in the prairie provinces of Manitoba, Saskatchewan, and Alberta, with small numbers settling in southern Ontario, British Columbia, Cape Breton Island in Nova Scotia, and Quebec. Once in Canada, the Ukrainian immigrants worked mostly as farmers with others finding employment as small business owners or as labourers.

Life was not easy for the Ukrainian immigrants who faced low wages, exploitation, and ethnic discrimination in Canada. Furthermore the Ukrainian Canadian community was full of internal strife rooted in often extreme ideological, political, and religious conflicts, such as nationalists versus socialists or Greek Catholics versus Ukrainian Orthodox. Despite or because of these divisions, the immigrants established a great number of cultural institutions and community organizations, including reading clubs, national homes, institutes, amateur theatrical groups, bookstores, and publishing companies.

In its entirety, the Ukrainian Canadian material selected for digitization from UTL (over 125 items) is a record of the life and times of an emigrant community struggling to maintain its cultural heritage far from its homeland and under very difficult conditions. These struggles are recounted in national- local- and institutional-level histories, and in novels, plays, poetry, and song. There are also examples of polemical literature by Ukrainian-Canadian socialists, nationalists, and members of vying Christian creeds. Other material is instructional, including: books in Ukrainian informing immigrants about the history, geography, agriculture, and political and social life of Canada; Ukrainian-English phrasebooks geared for new arrivals to Canada; recipes from English and Ukrainian cuisines with health recommendations; and self-improvement books. The remainder of the collection comprises statutes of Ukrainian Canadian organizations; directories of Ukrainian businesses, institutions and churches throughout Canada; and statistical data on Ukrainians in Canada.

Most of the material included in the Multicultural Canada project is in a collection assembled by the late John Luczkiw (1923-1974), a prominent University of Toronto alumnus and a former World War II refugee. He was born in Galicia, Western Ukraine, and immigrated to Germany where he pursued his studies, and then came to Canada in 1950. His family donated the collection to the Thomas Fisher Rare Book Library at the University of Toronto in 1982.  Over the years the collection has been supplemented by gifts from other donors living in the greater Toronto area. Additional material digitized for the Multicultural Canada project has been drawn from the Robarts Library at the University of Toronto, with additional selections contributed by the library of the St. Vladimir Institute in Toronto.

The University of Calgary has also significantly contributed to the documentation of Ukrainian Canadian culture by digitizing a large number of periodicals. Their on-line collection on the Multicultural Canada website includes about 20 calendar-almanacs and newspapers published by various civic, political, and religious organizations in Canada, including titles such as the Buduchnist' natsiï, Svitlo, Ukraïns'kyi robitnyk, Homin Ukraïny, Ukraïns'ki visty, and Tochylo.

The Multicultural Canada project was made possible with the support of the Department of Canadian Heritage through the Canadian Culture Online Strategy, as well as the project partners, the Sien Lok Society of Calgary, Library and Archives Canada, and the Chinese Freemasons of Canada.

If you have questions or would like more information about the Multicultural Canada project contact: Lynn Copeland copeland@sfu.ca or 778.782.3265 or visit:
http://www.multiculturalcanada.ca.

For more information about the John Luczkiw Collection of Ukrainian Canadiana contact: Ksenya Kiebuzinski ksenya.kiebuzinski@utoronto.ca or 416.978.1288. 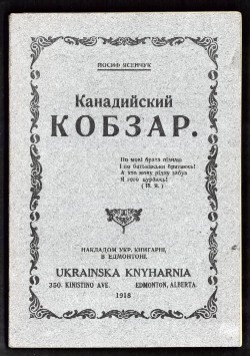