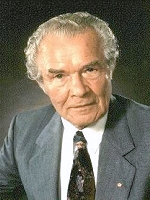 Canadian businessman and philanthropist, born 7 July 1921 in Verkhnie Syn'ovydne, Ukraine, died 1 November 2001 in Toronto, Canada. Jacyk left Ukraine in 1945 and came to Canada in 1949. He began his business career in Toronto. In 1950 he became an investment partner in the city's first Ukrainian bookstore, Arka. In 1956 he became a business partner of Accurate Builders Ltd. and in 1959 bought out the company. Soon he became a prominent businessman in land development in Toronto.

From the very beginning of his settlement in Canada, Petro Jacyk supported the development of the Ukrainian community in Toronto. He provided leadership, support and opportunity in fostering a better understanding of his native heritage, and made a meaningful contribution to Canadian multiculturalism. To make sure that his work in the field of higher education and Ukrainian culture would continue, Jacyk established the Petro Jacyk Education Foundation in 1986 with the following objectives: to advance Ukrainian scholarship at academic institutions in the West; to promote knowledge of Ukraine; and to foster better understanding and cooperation between Ukraine and the world community. Since Ukraine became an independent country the Foundation has been active in his native land.

Petro Jacyk's contributions to the University of Toronto Library include funding the microfilming of the Peter Jacyk Collection of Ukrainian Serials in 1983, establishing an endowment to support annual subscriptions to Ukrainian periodicals in 1994, and support for the creation of the Petro Jacyk Central and East European Resource Centre in 1995. His foundation has continued supporting the Library and beginning in 2006 has provided funds for the purchase, preservation, and/or digitization of retrospective Ukrainian library materials, and, beginning in 2008, a library fellowship to work on projects in the field of Ukrainian archives, librarianship, information sciences, or bibliography. Other contributions to the University of Toronto included support for the Chair of Ukrainian Studies and the establishment of The Petro Jacyk Program for the Study of Ukraine in 2001. He was a member of the President's Committee at the University of Toronto.

Jacyk's support for the development of Ukrainian studies is well appreciated by his countrymen as well as by educators and scholars at large. In recognition of his great contribution to higher education and Ukrainian scholarship the University of Alberta awarded Petro Jacyk an honorary Doctor of Laws degree in 1995. President Leonid Kuchma of Ukraine honoured Petro Jacyk with the Presidential Prize of Ukraine for his patronage of Ukrainian culture, education, and scholarship in 1996, and with Ukraine's highest civilian distinction, the Order of Yaroslav the Wise in 2000.